A chemist with expertise in oracle bone inscriptions 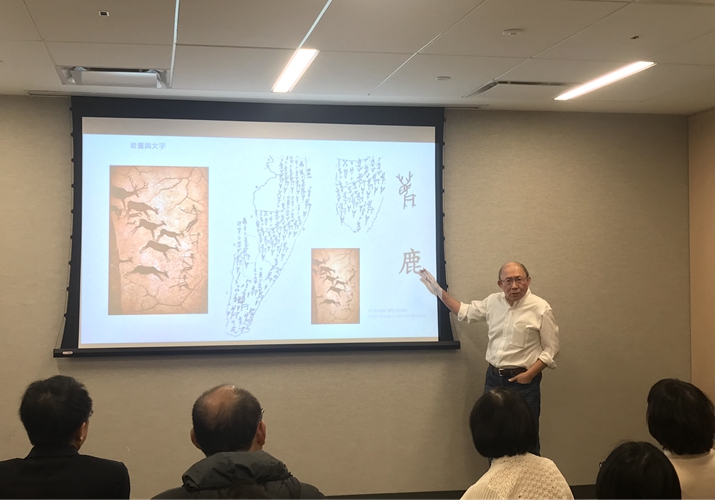 Recently, we invited one of our distinguished colleagues, Professor Kuang Yu Chen, to contribute a blog post, reflecting on his life and profession. Professor Chen is a distinguished professor emeritus in the Department of Chemistry and Chemical Biology and an affiliated faculty member in the Department of Asian Languages and Cultures. Given his rather unusual professional interest in both chemistry and oracle bone inscriptions (OBI 甲骨文), we asked him to share with us his story (posted on May 28, 2020).

During my high school and college years I was interested in the origin of life so I majored in chemistry in order to understand how the small molecules like nucleotides, amino acids, lipids and carbohydrates can be eventually turned into life. I was also interested in the origin of civilization so I audited many courses in humanities departments at National Taiwan University. I was fortunate to study oracle bone inscriptions (OBI) with Professor Jin Xiang-heng (金祥恒), who was trained by Dong Zuobin (董作賓), one of the founding figures of the OBI field. I also took courses with Professors Qu Wan-Li (屈萬里) and Li Xiao-ding (李孝定), all prominent scholars in ancient classics and Chinese epigraphy. At Yale University I did my Ph.D. work with Professor Jui H. Wang, studying the mechanism of oxygen evolution in photosynthesis. I did my post-doctoral work at Yale Medical School with Professor Evangelo Canellakis on cancer cell growth and polyamines. I was again fortunate enough to continue my pursuit of interest in the humanities with some prominent scholars at Yale. I took courses on Shang archaeology with Professor Chang Kwang-chih (張光直), pre-Qin Literature and Classics with Professor Jao Tsung-I (饒宗頤), and Egyptology with Prof. William Kelly Simpson. I continued my fruitful interactions with most of them after I started my academic career at Rutgers. The last time I saw Professor Jao was in Hong Kong, two months before he passed away at 101 years old.

Academic career can be demanding. One has to constantly deal with grant application, publish or perish, students and postdocs. So my interest in the humanities was put on the back burner for a while. Fortunately Professor Ching-I Tu, the then Chair of the Department of Asian Languages and Cultures accepted my request to be an adjunct faculty at his department, giving me an opportunity to offer a course on OBI (165:424 Origin and Development of Chinese Writing). The teaching not only rekindled my interest and quest in ancient civilization, but also provided me the impetus to start doing more serious research in the field. Based on my teaching materials, I published the book《商代甲骨中英讀本》(Readings of Shang Inscriptions). The French and Korean translations of the book are in progress.

What led to your interest in OBI?

Oracle bone inscriptions, OBI, refers to scripts engraved on animal bones and turtle shells in the Shang Dynasty (ca. 1600-1100 BCE), mostly for divination and record-keeping purposes. The inscriptions represent not only the earliest known Chinese writing system but also the oldest extant documents concerning various aspects of the Shang royal house, from sacrificial rituals to war and hunting. In short, OBI brought the legendary Shang Dynasty from foggy mist into vivid historical reality. The discovery of OBI was a watershed and pivotal event in the study of the origin of the Chinese civilization, as it not only validates the existence of the Shang Dynasty, but also helps us to realize that the dynasties earlier than Shang, as recorded by Sima Qian (about 145-86 BCE) in the Shiji (Records of the Grand Historian), might have existed as well. This realization provides a great impetus for pushing the archaeological work all over China. Furthermore, what we learned from OBI about the Shang civilization helps us understand how the Zhou Dynasty (about 1100-256 BCE) inherited the legacy of Shang, and how the stage was set for the unification by Qin Shihuang in 221 BCE.  Since OBI is already a mature writing system that contains all essential ingredients of modern Chinese, its discovery provided a great motivation for us to search, archaeologically and theoretically, for even earlier Chinese writing.

Archaeology is a booming field in China. Hundreds and thousands of excavated materials, from oracle bones, bronze vessels, bamboo slips, and silk scripts, provided a huge amount of raw textual data for studying not only paleography but also other aspects of ancient China, from Shang to Qin and Han Dynasties. With all kinds of database and AI technology, it is indeed an exciting time to do research on early China. Currently my research projects include: (i) Chemical analysis of red pigments on OBI (with Dr. Hwang Ming-chorng , Academia Sinica, Taipei); (ii) Functional analysis of the significance of the use cinnabar and ochre in mortuary practice (with He Yuling, Director, Anyang Archaeological Station); (iii)  Writing a book on bamboo and silk scripts of Qin Dynasty following the format of Readings of Shang Inscriptions (with Dr. Zhao Yan from Northeast Normal University, Changchun, a visiting scholar at Rutgers); (iv) Comparative study on the mechanism and process of the genesis of the four pristine writing systems, including Sumerian cuneiform, Egyptian, Mayan, and Shang OBI.