Contact Professor Kuang Yu Chen (This email address is being protected from spambots. You need JavaScript enabled to view it.) 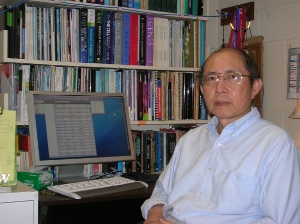 Writing was independently invented at least four times in human history; Sumerian cuneiform, Egyptian hieroglyphs, Chinese bone inscriptions and Olmec Mayan hieroglyphs are considered to be the four original and pristine writings. The four pristine writings are logographic at the time of their invention. Among them, only Chinese survives into the modern digital age and remains logographic. Strong archeological evidence supported the dating the origin of Sumerian and Egyptian writing to 3200 BCE and Olmec Mayan writing to 650 BCE. The earliest known Chinese writing is Jiaguwen 甲骨文(OBI, oracle bone inscriptions) of late Shang dynasty, ca. 1300-1046 BCE. OBI is a fully mature writing system, hence the origin of Chinese writing would have to be much earlier. By taking advantage of the logographic continuity of Chinese writing we are able to develop a model and show that the invention of Chinese writing should have occurred around or before 2100 BCE. This estimate is consistent with (i) the appearance of serekh-like iconic signs on Liangzhu jades and Dawenkou pottery urns; (ii) the appearance of string-like pottery marks (taowen) on the unearthed pottery shards from Dinggongcun, Longqiuzhuan and Liangzhu; and (iii) the appearance of legendary heroes mentioned in the transmitted ancient texts. Considering the wide distribution of taowen in China in the third millennium BCE and the structural continuity of Chinese writing, from Shang to modern time, we proposed a “funnel model” to illustrate the landscape at the beginning of Chinese writing and how it evolved into a stable writing system.