Tao Jiang's new book, Origins of Moral-Political Philosophy in Early China: Contestation of Humaneness, Justice, and Personal Freedom, is just published by Oxford University Press. It is available in both paperback and hardcover. 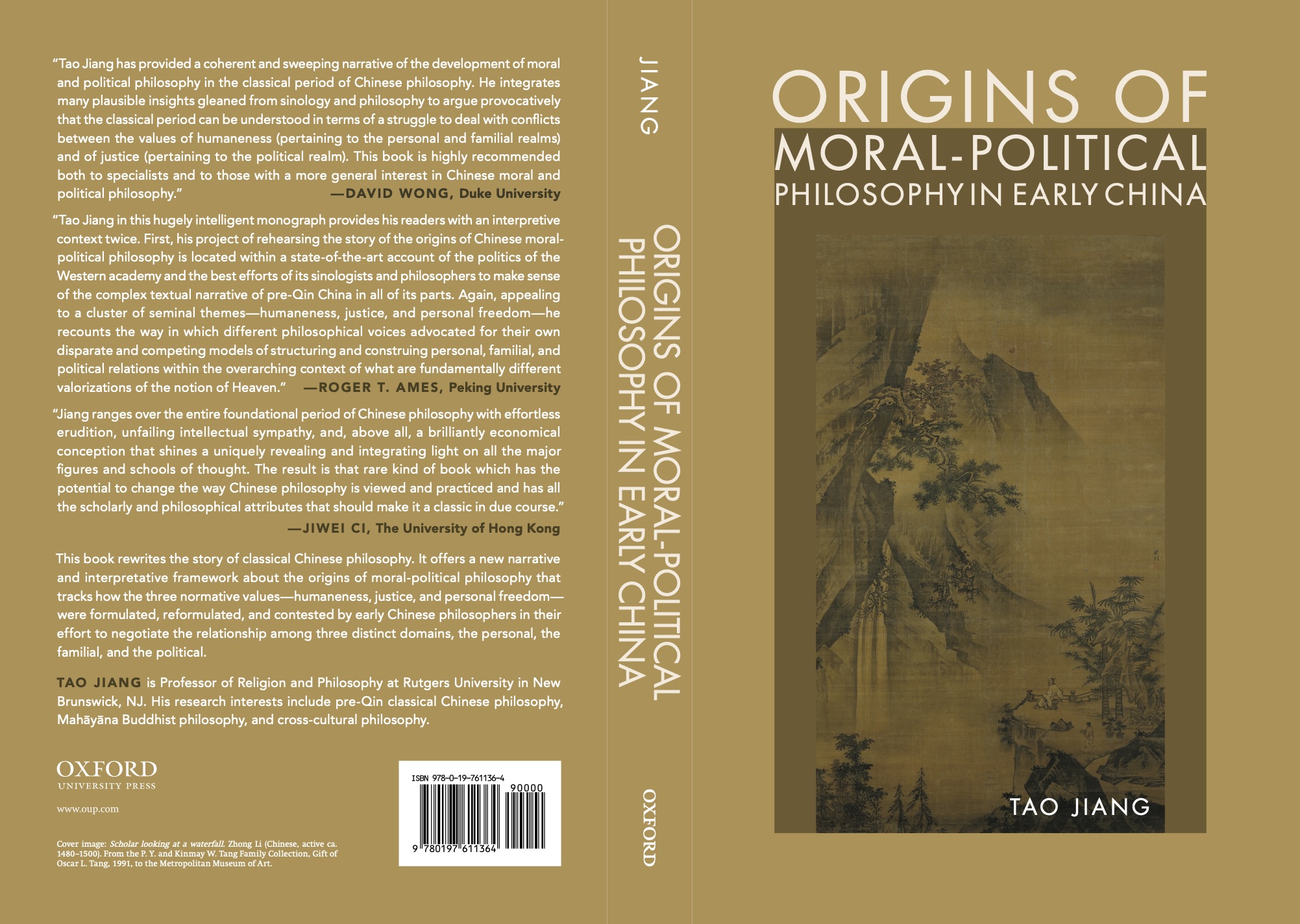 This book rewrites the story of classical Chinese philosophy, which has always been considered the single most creative and vibrant chapter in the history of Chinese philosophy. Works attributed to Confucius, Mozi, Mencius, Laozi, Zhuangzi, Xunzi, Han Feizi and many others represent the very origins of moral and political thinking in China. As testimony to their enduring stature, in recent decades many Chinese intellectuals, and even leading politicians, have turned to those classics, especially Confucian texts, for alternative or complementary sources of moral authority and political legitimacy. Therefore, philosophical inquiries into core normative values embedded in those classical texts are crucial to the ongoing scholarly discussion about China as China turns more culturally inward. It can also contribute to the spirited contemporary debate about the nature of philosophical reasoning, especially in the non-Western traditions.This book offers a new narrative and interpretative framework about the origins of moral-political philosophy that tracks how the three normative values, humaneness, justice, and personal freedom, were formulated, reformulated, and contested by early Chinese philosophers in their effort to negotiate the relationship among three distinct domains, the personal, the familial, and the political. Such efforts took place as those thinkers were reimagining a new moral-political order, debating its guiding norms, and exploring possible sources within the context of an evolving understanding of Heaven and its relationship with the humans. Tao Jiang argues that the competing visions in that debate can be characterized as a contestation between partialist humaneness and impartialist justice as the guiding norm for the newly imagined moral-political order, with the Confucians, the Mohists, the Laoists, and the so-called fajia thinkers being the major participants, constituting the mainstream philosophical project during this period. Thinkers lined up differently along the justice-humaneness spectrum with earlier ones maintaining some continuity between the two normative values (or at least trying to accommodate both to some extent) while later ones leaning more toward their exclusivity in the political/public domain. Zhuangzi and the Zhuangists were the outliers of the mainstream moral-political debate who rejected the very parameter of humaneness versus justice in that discourse. They were a lone voice advocating personal freedom, but the Zhuangist expressions of freedom were self-restricted to the margins of the political world and the interiority of one's heartmind. Such a take can shed new light on how the Zhuangist approach to personal freedom would profoundly impact the development of this idea in pre-modern Chinese political and intellectual history.